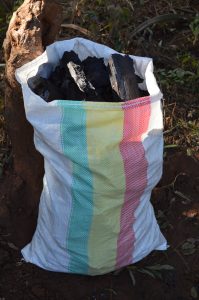 Charcoal production in Malawi has gotten a very bad reputation.  This is primarily due the deforestation which has unfortunately become linked to unsustainable practices of local charcoal makers.  This deforestation has led to drastic measures such as having to dispatch the Malawian Defense Force (MDF) to discourage illegal cutting in protected areas, and even the arrests and abuse of people in communities located near these protected areas.

What many people seem to forget is that trees are a renewable resource.  If we protect, conserve, and replenish our supply of trees the whole country could be covered in resources which provide firewood, building materials, fruits, medicines, fiber, oils, nuts, beauty, habitat, and so much more…including surplus for sustainable charcoal production.  In general, the burning of charcoal wastes less energy than burning wood directly.  These energy savings are increased even more when the charcoal is burned in a fuel-efficient stove.

When Never Ending Food moved into its current location in 2003, we found that all of the trees had been cut down for the production of maize.  The area around the house was swept bare and all vegetation had been removed.  The soil was compacted, infertile, and unproductive.  Using Permaculture practices, we began the process of healing the land, feeding the soil, and bringing back the trees.  Over the years, we have reached the point where just by trimming back the trees to allow the sunlight to still shine through in various areas, we now have such a surplus of firewood that we keep enough for our own needs and share the surplus (the 3rd ethic of Permaculture) with about 6-7 families in our area. 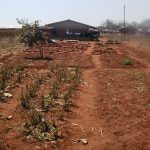 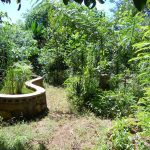 This year, we are in the process of building an outdoor classroom for the teaching of Permaculture principles.  In order to dig the foundation for this classroom, we needed to cut back a few trees.  We wanted to use these trees to their fullest potential, so we decided to try our hand at making charcoal.  We began by finding a few local community members who had the skills necessary to assemble a proper charcoal kiln.

The first step involved stacking the wood into a pile which would allow for the proper flow of air during the long and slow burning process: 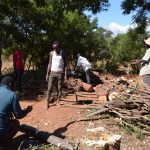 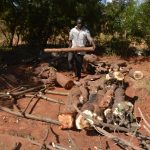 Next, the pile was covered with grass and dirt to provide fuel for the fire as well as helping to minimize the airflow: 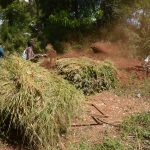 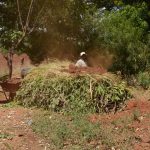 Once the pile was properly assembled, it was set on fire and allowed to burn slowly for almost one week: 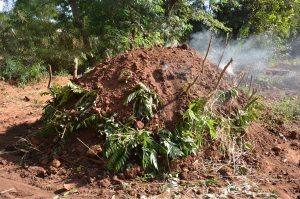 As the pile burned, the progress was occasionally checked and the finished charcoal from the outside edges was harvested: 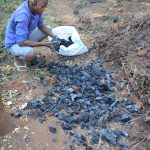 In the end, the entire pile was harvested and we ended up with about 8 large bags of charcoal from about 3 trees that were cut for use in the pile.  We paid the charcoal makers 25,000 kwacha to make and supervise the production process and ended up with about 80,000 kwacha of charcoal.  This process convinced us that charcoal is not the problem in Malawi, it can be part of the solution.  As people care for the earth and protect its abundance, we quickly move into production systems which yield surplus benefits.