By Kristof on February 22, 2018 in Uncategorized

This year in Malawi, farmers have faced a host of challenges ranging from drought-like conditions, followed by flooding, widespread outbreaks of fall armyworm, and even an increase in aphids.  If you follow agri-business news sites, there is now a growing call for scaling-up the use of genetic engineering to combat these problems.  However, using genetic engineering to mask one problem generally fails to address the root-causes of problems as a whole.  Nature is an intricately connected web of complex interactions, and, as John Muir, the Scottish-American Naturalist and environmental philosopher, once pointed out: “When one tugs at a single thing in nature, he finds it attached to the rest of the world.”  The current trend to use genetic engineering to make plants inherently toxic to the ecosystems in which they grow, or to make them resistant to the free-for-all spraying of herbicides, is contributing to the pollution of the natural systems which sustain all life on the planet (including humans).  In Pope Francis’ 2015 Encyclical on climate change, he wrote: “There is also pollution that affects everyone, caused by transport, industrial fumes, substances which contribute to the acidification of soil and water, fertilizers, insecticides, fungicides, herbicides and agrotoxins in general.  Technology, which, linked to business interests, is presented as the only way of solving these problems in fact proves incapable of seeing the mysterious network of relations between things and so sometimes solves one problem only to create others.” (Laudato Si’, section 20)

Natural solutions exist, and farmers in Malawi who have learned how to work with nature–rather than against it–are finding that, despite challenges, they are still outperforming many industrialized, monocropped, and high-input systems.  This first set of pictures were taken at Never Ending Food just as this season’s rains were beginning (Nov. 13, 2017).  Farmers who chose to monocrop maize were just starting to see germination and would have to wait another 4-5 months (March/April) to harvest any food.  Meanwhile, the diversified Permaculture systems, which mimic the abundance of nature, were already thriving and producing highly-nutritious foods. 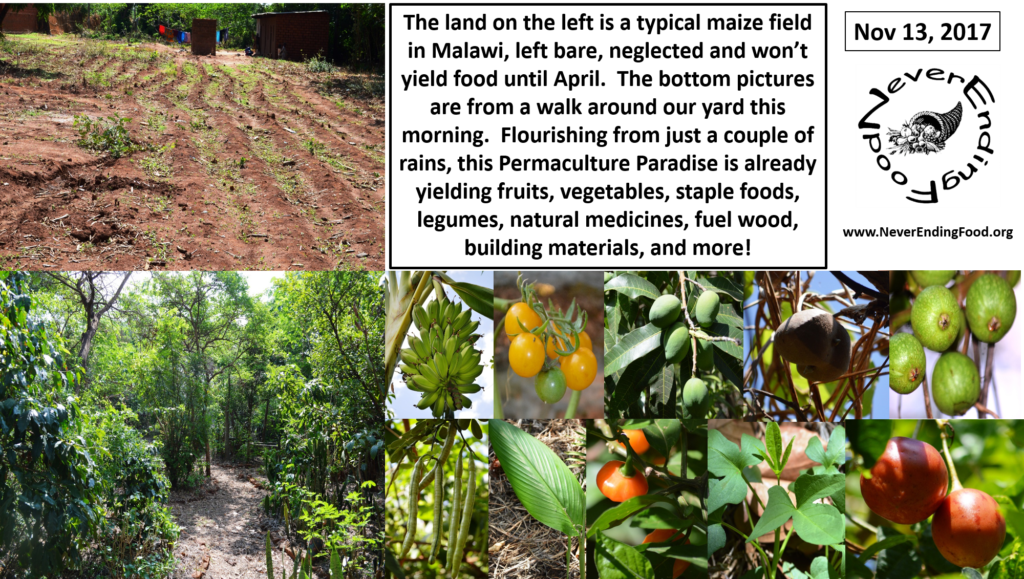 The pictures below were all taken in our community around Never Ending Food on Feb. 16, 2018 and show the difference between those who cared for the entirety of the ecosystem as opposed to those who didn’t.  The fields on the left are all monocropped maize fields, planted with expensive hybridized seed, and fed with expensive chemical fertilizers.  The fields on the right are all diversified, open-pollinated, and organic.  Solutions exist without having to use genetic engineering to adapt the world’s plants and animals to unhealthy systems of agriculture! 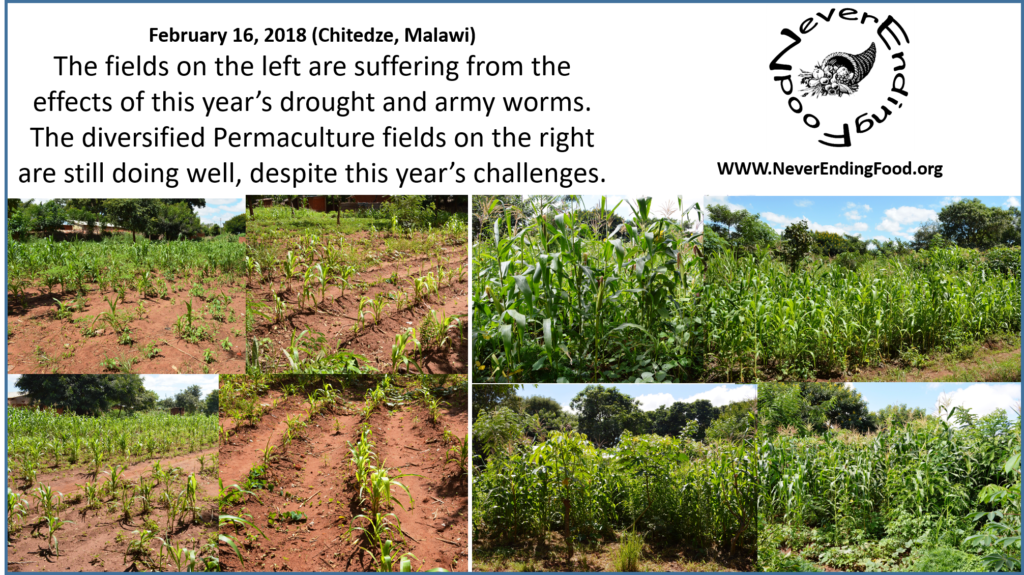