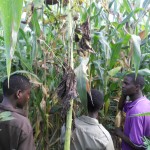 Never Ending Food is proud to announce the publishing of USAID’s AIDSTAR-One Technical Brief, entitled:.  Permaculture Design for Orphans and Vulnerable Children Programming: Low-Cost, Sustainable Solutions for Food and Nutrition Insecure Communities (Click on the link to download the PDF version of this document.)

This Technical Brief was co-authored by Kara Greenblott and Kristof Nordin, and provides a wonderful example of the direction that Permaculture is taking in helping to meet the current challenges that the world is facing.  Permaculture is an extremely well thought-out and experience-tested design tool that is currently being used throughout the world by specialists and amateurs alike.  Despite the growing professional recognition of the benefits and value that Permaculture design can bring to development work, many organizations have been a bit slow, and at times even a bit reluctant, to integrate these concepts into their current approaches.

There may be several reasons for this.  Firstly, when the term ‘Permaculture’ was first coined in Australia in the early 1970’s it attracted a large following of post-1960’s hippies who were concerned about the world’s growing environmental problems and who wanted to live a more basic and healthy back-to-earth lifestyle.  This was wonderful for mobilizing some incredibly creative, artistic, and resourceful minds in a focused direction, but as a result the ‘professional’ image of the Permaculture movement seems to have suffered a bit.  The same effect was seen on other ‘professional’ organizations; take for instance the United States Peace Corps.  When it was established by John F. Kennedy in the 1960s it too attracted many hippies and young persons who wished to avoid the possibility of being drafted into the Vietnam war.  Despite that fact that the Peace Corps now routinely recruits older and more experienced volunteers and has programs in business development, computer training, education, environment, agriculture, health, and many other sectors, it still continually works to break the image that it is comprised solely of young inexperienced volunteers.

But there may be another reason that Permaculture has been slow to come to light within development circles.  The following article tries to explain:

Permaculture has been quickly becoming one of the fastest growing global grassroots movements.  From rural farms to urban city planning, from individual households to large commercial production, from the public sector to the private, and from young to old, Permaculture has been able to offer something of value to the world as a whole.  The reason for this is simple, the founders of Permaculture (Bill Mollison and David Holmgren) asked a very basic and yet profound question: “Why aren’t we growing food the way that nature wants to grow it?”  Once this question was posed it began to change the way that people were looking at the world.

When we are teaching at Never Ending Food, we often ask participants what their agricultural land would look like if it were to be left alone for 5 or 10 years without any human interference.  The answer is always the same—it would begin to look like a forest.  Nature is always trying to move in the direction of diverse mixed-crop ecosystems that can support all forms of life, from the smallest bacteria to the largest of mammals.  Humans, on the other hand, have a terrible habit of using great amounts of energy to keep nature from being ‘natural’ and thereby limiting its ability to provide for our needs.  We cut down trees, bulldoze massive areas of land, cover the soil with pavement and cement, we over-sweep large areas around our houses, we burn the organic matter from fields, and now we even find people killing off all the plants in their fields with dangerous chemicals in the name of ‘conservation agriculture’.  If we had to invent a more ‘unnatural’ agricultural system it would be a difficult task.  We often remove all the ‘life’ from our fields, burn it, and then only plant one type food.  Nature just simply doesn’t work this way.  So, as we’ve removed ourselves from these natural processes, we have also created many problems. Soil infertility is now compensated for by using expensive chemical fertilizers, pest problems are answered with toxic pesticides, diseases and imbalance of growth are killed with the use of fungicides, herbicides, and other dangerous poisons.

By contrast, Permaculture offers a system of practically unlimited solutions that may be used to correct the detrimental and destructive course that civilization seems to have set itself upon, and for that reason it has been rapidly gaining a large base of practitioners, advocates, educators, and supporters.  But herein lies a paradox; despite being one of the world’s fastest growing movements, Permaculture has been slow to be embraced by  the ‘Development World’ (meaning Non-Governmental Organizations (NGO’s), Community-Based Organizations (CBO’s), and various other funding and implementing agencies) primarily because it does not fit nicely into the current ‘cookie-cutter’ paradigm that many organizations tend to use.  Many Development agencies prefer to focus their efforts on easily replicable formulas in which a single individual may be taught a pre-determined and standardized way of doing something.  This is then replicated by that person’s family or neighbors who, in turn, are supposed to influence their communities, and then, in theory, we have entire communities and nations all using the same approach.  Thankfully, societies (just like ecosystems) have too many variables for a singular approach to work uniformly throughout the world.  Imagine how dull and monotonous a world we would live in if this were to be the case. 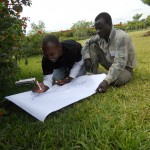 Alternatively, Permaculture offers a ‘design’ tool that teaches people how to thinkabout their resources and how to use these resources to plan for a sustainable future that, in turn, meets the needs of the living elements of that system.  This means that there will never, and can never, be a ‘recipe’ for implementing Permaculture Design.  Each site will be different because it begins with different resources and is being designed to meet different needs.  Even in social settings that are similar, for example the primary schools that Malawi has been using Permaculture to assist in creating ‘Productive School Environments’, there will not be two schools that end up creating identical Permaculture designs.  Even neighbors who live directly adjacent to one another in the same community will often come up with completely different designs for the type of Permaculture that they want to implement.  This is due to a countless number of personal preferences that may influence the end results, such as: personal tastes, diets, culture, backgrounds, family size, income levels, religious beliefs, skills/knowledge base, gender, age, occupation, etc. 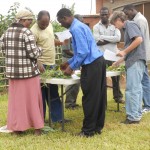 Does this mean, then, that Permaculture is ‘far too complicated’ to be used as a ‘Development Tool’?  Quite the contrary.  The Permaculture approach actually falls in line quite naturally with the main principles of community organizing.  The first of these tenants is: “Never do something for people that they can do for themselves.”  By empowering communities to utilize their own resources (including local skills and traditional knowledge), individuals—and the community as a whole—are often able to gain the confidence that they need to not only face the future, but actually begin to plan for it in a constructive and productive manner.  This sense of ‘community empowerment’ leads right into the second main principle of community organizing, which is:  “The organizer must have confidence in the capacity of the people to determine their own destiny.”  This is exactly the idea behind the process of the creation of a Permaculture ‘Design’.  It walks people through a process of opening their eyes to a multitude of resources that they may never have realized that they possessed, but then it allows the people themselves the freedom to decide how they want to use these resources.  It is actually because of the fact that Permaculture is a ‘thinking tool’ that it may be taught and applied ‘universally’ as a development tool.  When one is able to ‘think’ in terms of a ‘function’ of a resource rather than of the resource itself, then one is able to apply the same thinking process to whatever situation one may find themselves in.  For example, instead of saying that a person should protect the soil from the sun by planting pumpkins, Permaculture teaches the ‘function’ that a ‘groundcover’ serves (i.e. protection from the sun, moisture retention, suppression of weeds, etc) and then it is up to the individual to decide what type of groundcover is best for their particular situation (i.e. a living vine, composted mulch, a rock mulch, old newspapers, ornamentals, grass, etc).

Even though Permaculture design leaves a great deal of room for adaptation and flexibility, it is taught a part of a structured process which all implementers inevitably follow (both formally and informally).  These steps include:

Many Organizations are beginning to take a look at Permaculture as a ‘Development Tool’ to be used in assisting with the current challenges that the world is facing:  Malnutrition is easily addressed through nutrient-dense diverse planting systems; ‘Hungry Seasons’ (or gaps in agriculture) are met by working seasonally, preserving surplus, and adding integrated systems plant/animal growing systems; poverty reduction is quickly attained when expensive inputs are reduced, which not only saves money but also increases the overall profit margin of items that are sold;  income generation can also be achieved through the creation of value-added products and creative income-generating activities that utilize natural resources, non-timber forest products, and animal products; even climate change and other environmental concerns are not only accomplished, but are actually integral to the whole premise of Permaculture thinking. 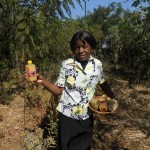 In Malawi we have had several concrete examples of Permaculture being used as a development tool: