In 2006, we acquired some land that had some unfired brick buildings already constructed on it.  At the time that we purchased it, there were 26 secondary school students (high school equivalent) boarding in these structures.  Many were sleeping four to a room in a space no larger than 10 feet x 10 feet.  The first thing we did was put a limit of no more than two people to a room, simply for humanitarian and hygiene purposes.  It was at this time that we had the idea to try to create a “model village” in which people could live a traditional village lifestyle while at the same time showing that Permaculture principles could be applied to their daily routines and surroundings.

This didn’t work so well when the students were there.  We struggled to get them to understand what we were trying to accomplish, and as typical teenagers anywhere in the world, they seemed a bit more interested in things other than growing food.  There was a lot of miscommunication such as plastics being thrown into banana pits and organic matter being thrown into the burning pit.  There was also a complete breakdown of cleanliness as we had asked them to reduce the vast areas that they had been sweeping, which seemed to translate into “don’t sweep any more and put trash anywhere”.  So, after almost a year of feeling a bit like Sisyphus rolling the rock to the top of the hill only to have it roll back down again, we decided no more students.  In the mean time, we turned our attentions elsewhere and put the whole model village idea on hold.

After several months we hosted an intern named Hope Thornton, who was working on her Master’s degree.  It was her persistence and enthusiasm to renew the model village idea that got us back on track.  She initially worked with some of the local children to create a design for the area and then begin building guilds.  (Click here to see more about Hope’s work in the model village in a Virtual Tour of Chitedze) She then assisted us in identifying our first family that began renting one of the houses.  This was Mrs. Mwale, a now retired primary school teacher (elementary equivalent), who houses several children that she takes care of.  Hope worked with her to help her understand the objectives of the area, as well as the ground rules for living in the house.  We had decided to charge rent at a rate that was much lower than the going rate as long as the tenants agreed to apply Permaculture principles.

Since that time, Mrs. Mwale has blossomed into a full-fledged Permaculturalist and an incredible spokesperson for the whole model village concept.  She is able to tell people how much she was initially spending on food for the children and how much she is saving now due to the fact that so much is grown around her home.  She also tells people about how the fuel-efficient wood stove that we gave her has cut her firewood consumption in half, which was another large cost for her as firewood is purchased in the local market.  Now she even tells people that with the trimming of the trees that have been planted she is even starting to harvest firewood for free!  She is a great role model and we have now made her the “Manager” of the model village and eliminated her rent.  (She is actually making money now, because Khalidwe, our 5 year old daughter, has talked us into hiring her to be a part-time tutor after school hours.) 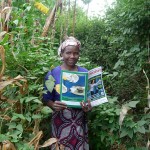 (LEFT: Mrs. Mwale and two of the children that she takes care of. RIGHT: standing in one of her guilds with the Permaculture Magazine in which she and the work that we have been doing has been highlighted in the Summer ’08 No. 56 issue.  For more information on this magazine from the U.K., please go to www.permaculture.co.uk)

The second family to move in is a very young couple, the Lebums, who have just had their first baby.  We had an interview with them before they moved in to explain everything and they seemed very interested and willing to give new things a try.  So far it has been working out wonderfully.  They have been showing initiative to create new designs and reuse all of there grey water on the trees and plants.

(ABOVE: Jennifer Lebum standing in front of her own design in her front yard, the beans and other vegetables receive much of her wash water)

The third family moved in shortly before the end of 2007 and had agreed to all the conditions of living in the house, but when it came to putting it into practice they were unwilling to try.   We have had to ask them to leave and now we have a new family, the Chindimbas.  The husband is a very talented carpenter and has made several beautiful things for us.  They have some learning to do, but they are already showing that they are willing to try.  And, for the first time in a long time, Mr. Chindimba’s work bench is now in the shade!

(ABOVE: Paul Chindimba working in the shade)

The reason we tell you all of this is to show that Permaculture is not something that people in Malawi immediately take to.  More often than not it is exactly the opposite, it is something people shun as being “dirty” or “unhygenic”.  This comes from years of indoctrinated thinking that “swept bare” is the same as “clean”.  When teaching, we try to get people to understand the why’s of Permaculture long before we get to the how’s.  We teach about why good nutrition is important, why caring for the earth makes a difference, why their families will be healthier, and why these methods can help solve many of Malawi’s problems.  Then, after all that we teach people how to build guilds and make compost, etc.

It may sound a bit harsh to hear that we have had to evict some people over the course of trying to build up the model village, but we have been teaching in Malawi long enough to know that we usually don’t spend too much of our energy and efforts on people who are not ready to hear and try new things.  The majority of our successes have come simply from finding the right people to work with.  Once this is done, the right person can go on to teach many more people and in a much more efficient manner than we ever could.

The following are some updated before and after pictures of the model village area.  All pictures are from 2006-2008, only two years.  Enjoy!

Pictures of Paul Chindimba’s house, before and after 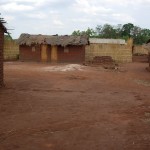 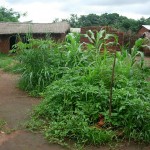 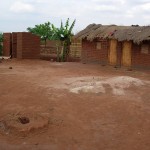 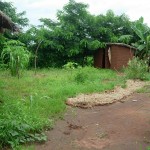 Pictures of Mrs. Mwale’s house, before and after 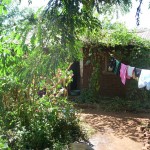 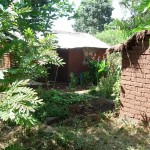