What is human waste?  In Permaculture there is no such thing, everything becomes a resource…including our own manure!  The practice of using human manure to feed the soil is not a new concept, many countries have been using these practices for centuries.  We have, however, learned a great deal in recent years about health, hygiene, disease-carrying pathagens, and how to keep ourselfs safe and healthy.   Composting systems have often gained a bad reputation due to the use of ‘night-soil’ which is the direct use of human manure without safely composting the materials first.  Using ‘night-soil’ is an unsafe and unhealthy practice.  When safe and environmentally-friendly practices are applied correctly in composting toilet systems a person ends up with a healthy, nutrient-rich, and sustainable resource for the healing of the planet.

There are several ways to make a composting toilet, some are extremely cheap while others can be quite expensive.  The important thing to know is that they all work!  A great resource for beginners is the “Humanure Handbook” by Joseph Jenkins.   This covers all the basics of composting toilet systems, the principles behind why they work, different designs for their construction, and it even has a great overview of grey-water systems.  I thought that it would read like a thick school-book, but it doesn’t at all; Mr. Jenkins’ wonderful sense of humor and well-documented research (including statistics for those who need proof) makes this a fast and fun read.  It was the book that got Stacia and I onto the composting toilet (no pun intended) path and we’ve never looked back.  We started using different types of composting toilets in 1998 then put in permanent systems when we moved into our own home.  We’ve had our composting toilet system in place for over three years now and we absolutely love it!  Our daughter, Khalidwe, has grown up with it and we now have problems with her when we travel because she loathes flush toilets to the point of refusing to use them (especially the sensor-controlled toilets in the airports where the flush can sneak up on you).

Our system is about as easy and cheap as you can possibly imagine.  It is simply a bucket.  If you can afford a bucket you can afford a composting toilet.  The bucket that we use cost us about two dollars (300 kwacha).  You can squat over the bucket to do your business as most Malawians are used to doing over the hole of their long-drop (chimbudzi), or you can put a seat of some sort over it.  We began with a broken 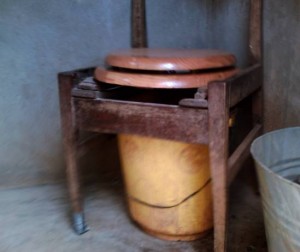 chair to which we attached a toilet seat.   Next to the toilet we keep a container of “cover” material.  This can be any organic matter, the smaller the better.  Examples include: sawdust, wood ash, peanut shells, rice husks, half-finshed compost, crushed leaves, etc.  You want the organic matter to be able to cover the manure in the bucket enough to eliminate the odor.  Once the smell is gone so are the flies and everything else that might be attracted to a bucket of poop.  If the bucket is maintained properly (and this can be done by even the youngest of children) the lack of smell is so amazing that we have now set up the very same bucket system inside of our house!  When we first moved into the house that we are currently in we had a typical Malawian long-drop (chimbudzi) toilet, which is a great deal of work to build due to the fact that the hole is usally dug about 4-6 meters or deeper, and no matter how much organic matter and ash that we would dump down the hole we continually had to deal with hundreds of cockroaches, houseflies, and odors.  In the entire three years that we have used our composting toilet system we have never had any problem with cockroaches, flies, or bad smells! 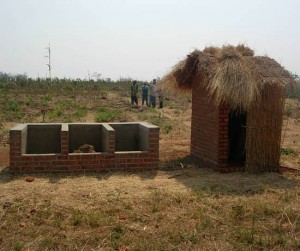 When a bucket is filled, (which for our family and staff is about 2-3 times a week) we take it to a three-bin system in which one bin is where we dump the bucket.  The bucket is then rinsed with a small amount of water and this water is also dumped in the bin, and then this is all covered with larger organic matter that is stored in the second bin.  Due to the fact that the bucket’s contents are again covered with organic matter there is also no smell or flies around the bin.  Our bins are about one meter by one meter in size, and you don’t need to build a bin, you can dig a hole in the ground, use an old oil-drum, or even just make a heap right on top of the ground (we just built the bins to make it all look cool).  Once a bin is full, which for our family takes about 4-6 months, we leave that bin to sit and compost completely for about another 4-6 months.  During this waiting period we begin to use the third bin.  When the third bin is full and ready to be left for 4-6 months, the first bin is ready for harvesting and using.  You can use the finished product just as you would any other compost.  It is safe, user-friendly, and smells just like healthy soil. 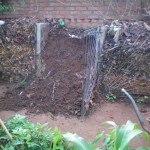 Our 3-bin system. The middle bin is done and being harvested.

One of our bins will cover the planting stations in an area almost equivalent to the area that Malawian farmers use approximately two bags of fertilizer on.  One bag of fertilizer now sells around 10,000 kwacha ($60 US), so that means that we save over 20,000 kwacha ($120 US) just from one compost toilet bin – and we get about 3 bins a year ($360 US).  When people us that they have problems due to large family size, we encourage them to rejoice in how much fertilizer a large family can produce!   Another benefit of this system is that the urine can be all added right to the bin without any need for separation.  (This can be an issue with enclosed cement units).  The urine, (which is Urea and something that Malawian farmers again use thier money to purchase each year to apply to thier fields), actually helps to facilitate the composting process, and because of the organic matter that is added after each bucket is dumped in the bin all fluids are absorbed and used without problems of leaching or soil contamination.

The bucket system is great for family size, but if you want something for larger groups, such as at a 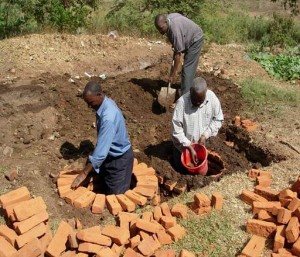 A 2-pit system being built

school, there are alternatives that work great.  One option is a two-pit system in which a two meter by one meter pit is dug about one meter deep.  Bricks and mud are lined in a ‘honeycomb’ fashion to create two pits and the soil is then back filled around these pits.  A sanitation-platform (or ‘san-plat’) is then made from cement, one bag of cement (about 2,500 kwacha or $17 US) can make 4 san-plats.  These pits are used the same as the bucket system without the need for emptying the bucket.  Each time the toilet is used organic matter is added as a cover-material.  When one pit is filled up the san-plat is moved to the second hole and the pit is left to decompose for the 4-6 months.  When the compost is finished it is dug out of the pit and the san-plat is moved back.

A typical sanitation platfor or 'san-plat'

Another, more costly but larger and easier to harvest, method is the two cement chamber system.  In this method two cement chambers are fashioned with an access panel at the back for harvesting.  This is used the same as the pit system in which one chamber is used until it is filled up and then the second chamber is used.  The first chamber is allowed to decompose for the 4-6 months and then the back panel is opened for harvesting.  These systems often divert the urine into a container or banana-pit to eliminate the problem of too much fluid accumulating within the chamber itself.  This system is gaining a great deal of recognition in Malawi and the northern school district of Karonga is in the process of building up to 100 of these units! 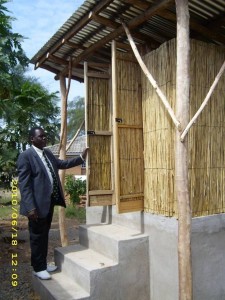 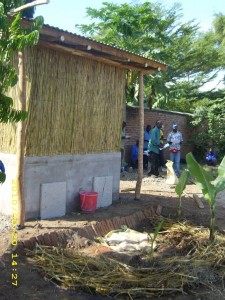