Never Ending Food is constantly trying to have a positive impact on Malawi, especially in its own community.  There are a lot of barriers, however, that stand in the way of behavior change.  We face a loss of traditional knowledge, a stigmatization of local foods, a constant push towards high-input chemical-based agriculture, a lack of education, and a lack of understanding concerning envrionmental processes.

In order to implement Permaculture in Malawi, people often find themselves having to challenge long held views and cultural beliefs.  It is difficult to articulate some of the problems that Malawi faces, but one of the most devestating things that we face is a form of “jealousy” that prohibits individuals and members of the community from getting ahead.  For example, it is a common practice that when people move from one house to another they often cut down all of the trees and destroy structures (such as bathing areas, toilets, fences, etc), so that others don’t benefit.   We have even had people that we have trained in Permaculture go home and start a small garden of guilds and local plants only to find their efforts uprooted and destroyed by members of the community.  So, for a person to really “take the plunge” into Permaculture they are often opening themselves up to ridicule from neighbors, jealousy, and even sabotage of property.

NEF is constantly trying to challenge these issues and work towards understanding through education, demonstrations, hands-on learning, and by trying to be role models for the community.  At the end of 2005, a young Malawian man by the name of Issac Kafakalawa came to us to enquire about employment.  He had recently a diploma in Tobacco Production, which had included quite a bit of education on high-input monocrop agricultural methods.  At that time, he agreed to joining Never Ending Food as an “apprentice” to further his education and learn about sustainable practices such as Permaculture. 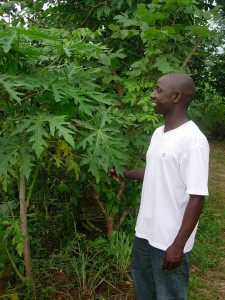 Within a matter of just a few months, Issac showed a true understanding for the types of systems that we are using at NEF and the reasons behind using them.  His brother is a pastor for Assemblies of God (AOG) and at the time of Issac’s apprenticeship he was serving a local AOG church within the Chitedze community.  Issac obtained permission from his brother to use some of the land at the church and convert it into a Permaculture demonstration plot.  He also brought his brother to NEF to help him understand what Permaculture was all about and how it can be used to improve the health of Malawi.  We had some good conversations at this time about the role that churches can play in helping to improve Malawi’s environment.  Many people who call themselves religious are often the same people who are destroying creation by cutting down all the trees, burning the land, polluting, and using practices that lead to environmental degradation.  We talked about using the church’s messages to renew the call for people to be “stewards” of the earth.

Issac’s first step towards design was to identify the areas in which the church would allow him to work with.  He also asked NEF to come to the church and look at the resources that were available, help to assess the challenges, and give advice on how to proceed.  The main area that was chosen for the demonstration plot was an area of the church’s parking lot that was being swept bare every day and the soil had been heavily compacted. 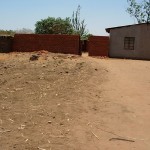 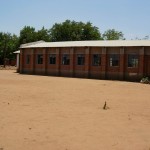 Issac decided to lay out a design that would identify pathways and garden beds.  All sweeping was stopped in this area, and the sweeping piles from other areas were put on the soil inside the identified garden beds.  Due to the soil being so compacted, Issac along with the help of several community members, began to prepare holes for tree planting and other types of seedlings and cuttings. 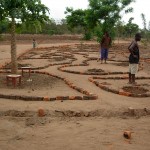 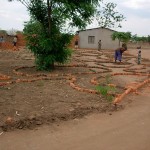 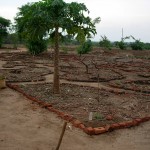 In the 2005-06 rainy season, Issac planted guilds in the area with a large assortment of local seeds, particularily from the legume family to help fix nitrogen in the area and improve soil fertility.

During the 2006 dry season, very little maintanence was required due to the types of plants that Issac chose to use.  He selected a lot of fast growing and hardy perennials that would establish themselves during the first rainy season.  For the few small trees and seedlings that did require water during the first dry season, the pastor’s family was able to use leftover grey water from the washing of clothes or dishes to apply on these plants.  Also, during this dry season organic matter was continued to be applied to the garden beds to help further improve the soil structure and fertility.  Once the 2006-07 rainy season came, the area exploded with life (as you can see in the pictures below), and everything that you see growing was puposefully selected to fulfill the functions of a Permaculture guild and provide lots and lots of food! 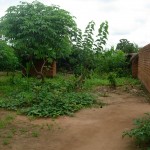 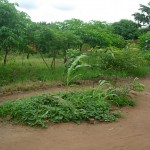 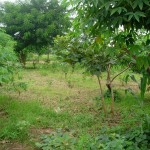 Issac was brave enough to take the first step towards improving his environment and the community that he lives in. He was also strong enough to face the riducule that he recieved from some members of the community.  Without getting angry, he patiently tried to teach people about what he was doing and why he was doing it.  To this day he continues to bring people to Never Ending Food to help them learn about Permaculture’s potential, and he is constantly asking questions and trying to learn and try new things.  Since his apprenticeship with Never Ending Food, his brother has been transferred to a new church and a discussion has been started with the new pastor and his family about the purpose behind the Permaculture demonstration plot at their church.  NEF, with the assistance of our intern, Hope Thornton, is also trying to put together an educational bulletin board for the church.  This board will show pictures of how the demonstration plot started and how it has progressed, so that people can learn from Issac’s efforts and hopefully begin to apply it to their own lives.

Never Ending Food salutes Mr. Kafakalawa for his achievments and we hope that more people will try to learn from his ideas and see how Permaculture principles can be used to ensure a sustainable future for Malawi.