Maulana Village is located about 1.5 km up the road from Never Ending Food (NEF).  This is the home village of Luwayo Biswick, the Permaculture Manager at NEF.  Since Luwayo’s introduction to Permaculture he seemed to grasp the potential that these ideas had for helping to feed the people of Maulana as well as helping to improve the health and economic conditions.  He set about transforming the house of his mother and father (where he was living), as well as working closely with Chief Maulana.  The chief, sceptical at first, eventually became convinced that Permaculture really could lend itself to improving the living conditions of  this village.  He was so convinced, in fact, that he began to transform his own yard.  Now, after only about one and a half years of implementation, even the chief’s yard has become a role model to the villagers of Maulana. 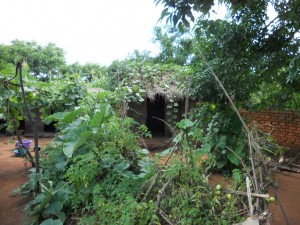 Luwayo began his transformations at the back of his parent’s house where there was already a  small maize garden established.  He started with some  small changes such as intercropping some nitrogen-fixing legumes through out the maize and adding some water-loving plants near where the family’s bath water ran out.  Slowly, he began to take over more and more of the family’s homestead and convert it to food production.  Without doing any digging, he layered mulch about a foot and a half deep onto the over-swept and compacted soil and planted sweet potato cuttings.  In less than a year he was harvesting sweep potatoes the size of a person’s leg!  He used every available supporter to stack food vertically.  This included the roof of his parent’s house, their bathing structure, and every existing tree on the plot.  The result–an edible food forest with a canopy of vines that are now dropping food throughout the year (including beans, passion fruits, pawpawdillas,  and chayote).  He even designed areas for his parents, friends, and family to sit in the shade and enjoy each other’s company.  These natural grottos are now well-established and well-used. 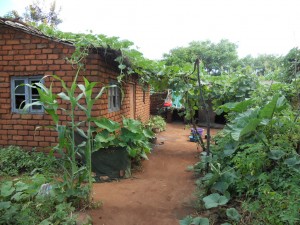 Luwayo also received funding to construct a composting toilet at his  house.  This model, based on the design that is promoted through Malawi’s School Health and Nutrition programme (SHN) is a cement two-chamber unit where one chamber is used unti it is full and then left for 4-6 months to decompose while the second chamber is being used.  The finished product is then harvested out of the back of the chamber and is ready for use.  Luwayo received several bags of organic fertilizer this year from a local producer, but he decided not to use it because he wanted to see the results of using just the compost from his toilet.  The results, again, have been phenomenal!  His maize is about a foot and a half taller than his neighbor’s maize,  and the Luwayo has reported that the neighbor has applied chemical fertilizers twice.  Due to the working demonstration that he built at his house, Luwayo now teaches about the benefits of  composting toilets on almost a daily basis.  He has even had classes of students come from the local school just to learn more about the toilet system! 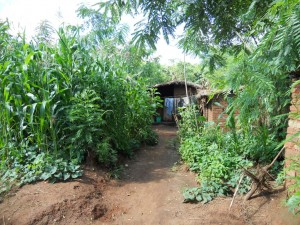 The new 'edible' front yard of one of the Biswick's neighbors

As more and more people began to get interested Luwayo began to reach out to other interested people in the village.  One of  his neighbors really liked the ideas that were being put into practice and he began to convert his own yard into an edible forest.  Luwayo also tried to make an impact on some of the more public areas of his village,  including the local borehole and the communal washing area.  Both of these areas now add beauty, food, and natural medicines to the village of Maulana.  This is truly a village in transition! 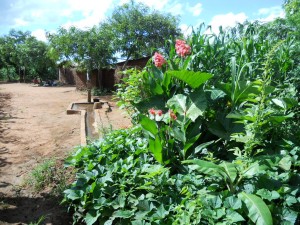 The Maulana Village borehole-Making use of runoff water to nurish and beautify! 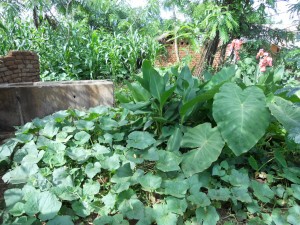 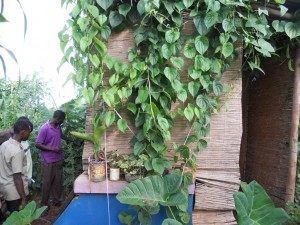