92 percent of the schools surveyed stated they are unable to continue school meals if donors pulled out.

School meals is one part of a larger School Health and Nutrition (SHN) programme that was expanded in 2006. SHN requires a collaboration between Education, Agriculture and Health to succeed.  There is a policy, strategy and guidelines to assure that everyone is clear on roles and goals.

This article overviews the beginning stages of the development process and provides you with some of the steps along the way highlighting a few successes and challenges.  An update has been added in 2020 to provide you with links to organisations that have continued to work with Permaculture to sustain SHN.

Before we begin, we’ll share 2 short stories from schools located in Thyolo:

The following sets of pictures are from October 2006, June 2007, and April 2008.  The first set are just the picture, the second set has captions describing them to help show the fixed points in each picture – it gets hard to believe that the pictures are taken in the same place with all the plants and trees! 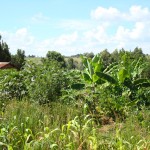 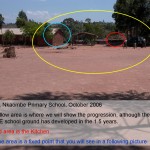 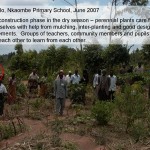 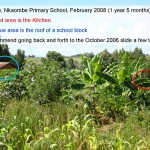 This school caught onto the idea of Permaculture immediately.  In the initial school half-day sensitizations in July 2006, they went back to their school and start to apply the ideas.  By October 2006 when we held the first workshops, this school already brough experience to the table – amazing people are at that school!

They organized themselves by class and village so that each area of the school had a group in charge of its design and maintenance – these really helps to break up big bare peices of earth into smaller, more manageable pieces.  The head master and and the Teacher Permaculture Faciliator were strong forces of change and implemented everything at their homes.  Positive role models are extremely valuable in the process of change.

A Teacher Development Centre is a central point for 10-15 primary schools (the previous story of Nkaombe is of a school that is supported by Thunga TDC).  At the TDC there is a Primary Education Advisor who supports primary school teachers to improve their access to resources, knowledge and skills.  Teachers use the TDC for meetings, reporting and learning.  The end result of this aims at improved learning environments for the children and the parents / community members who are involved in the school. 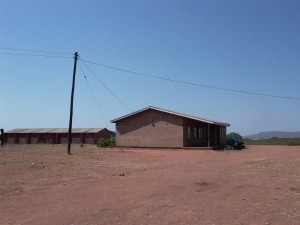 This picture is of Thunga TDC in October 2006 (with the secondary school in the background, not directly involved in the pilot, but who has started copying the work at the TDC and has joined in on the planning and coordination committee’s work). It takes a lot of work to keep a TDC looking like this!  Daily sweeping of the grounds takes 20 people 30 minutes every day which is 10 hours of people labour every day.  For the school year there are 180 school days which is 1,800 hours a year of work (or 225 working days – that’s a lot of time and energy wasted!).

The TDC committee and community had a hard time starting up and catching on to the ideas in the programme.  Many still thought there were going to be ‘handouts’ provided such as tools, seeds, money, etc.  The few that got the idea tried to develop the land, but those that didn’t get it worked directly against the progress.

Something finally changed about a year after the programme started (October 2006 was the first workshop, they came around in about October 2007).  Once the TDC committee and community were all on the same page, they were able to work wonders in a short amount of time. 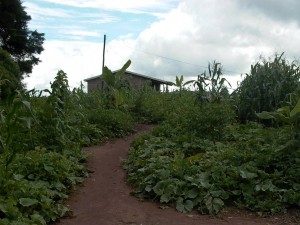 This picture shows the result of the committees work from October 2007 to February 2008 (5 months).  How did they manage this?  First, working together towards the same vision.  Next, taking a close look at all the resources they had available to them.  Then, creating a design based on their resources, their vision and the realities of the climate and geography where they are located.  Finally, implementing the design, adapting it as needed along the way and Viola! improved environment, food and money.

The TDC has a market just 100 meters from where they are and they took advantage of all the organic matter, including seeds, that get swept into piles there.  Instead of leaving the resource wasted, they collected the piles of organic matter and made it into rich planting beds.  When the rainy season came in December, their land was ready to grow – and grow it did!

They now are able to harvest vegetables daily, some for eating and some for sale back to the market.  Data on the estimated amounts harvested are coming in from the schools in April and May, so in the future we hope to share more concrete estimates with you.  But, we know this – the land is producing where it wasn’t producing before, all because of a shift in mindset and using the resources that were previously wasted.

Let’s go back to the beginning of the story so that you can learn how we developed this idea at a national level.

In January 2006 the Ministry of Education, Science and Technolgy (MoEST) began to develop a school food programme that would benefit all schools and be able to be completely run by the MoEST and communities. A National Working Group of 19 people from all levels (headquarters, divisions, districts, schools and communities) worked together to explore current programmes around the world and learn from lessons already taking place in Malawi.

The overall goal is for teachers to physically implement the curriculum at the School with the learners.

In order for the programme to be sustainable, the National Working Group felt the following principles are important and should be followed in Malawi:

To encourage sustainability, the emphasis is on low-input strategies that every school or community in Malawi can replicate using their own resources and without the need for additional outside funding. The responsibility for the long-term support for the project lies directly with MoE through integration of the ideas into the teacher and agricultural training systems.

School is at the Leader right from the Beginning

It is expected that schools will need 1 and a half years of technical guidance to take them through a full cycle of seasons. The 1.5 years starts with the:

This is in contrast to what most development programmes do when they put the technical advisor as the leader at the start and then wait until the last month to ‘hand over’.  In our case, the “Exit Strategy and Hand Over” start at the beginning.It took about 6 months to develop the programme which was termed the “Sustainable Food and Nutrition Programme” and based on Permaculture Design principles.  The 2 main activities in the programme are:

The concept was approved by the MoEST for piloting and taken to District Executive Committees for feedback and interest in taking part in the pilot.  The idea was enthusiastically received. Older people commented that this idea is not a new one, school gardens are something that used to happen in schools as part of agriculture lessons when they were children but faded away over the years. The difference between the past and the current programme is that it is integrated throughout the school system (school, community and agriculture extension) and across almost every subject and is built for sustainability and local control of the programme.

The timeline for the process is highlighted here:

Each school was selected through a sensitization process which stressed that there would be no handouts or inputs or incentives, that the incentive was improved food and nutrition security and an improved environment.

It was also stressed that the school would need to organize itself to get all the planning, implementation and monitoring done. No one would do it for them. Only technical knowledge and skills would be given. Schools that were not interested in this goal, or who had other critical problems at their schools were encouraged not to apply! It sounds a bit harsh, but with the level of dependency throughout Malawi, it was important to identify those who are truly interested, not those who were looking for allowances.

The following is a list of the initial pilot schools, if you are in Malawi, I encourage you to visit them by first letting the District Edcuation Office staff know that you would like to visit.  There is now a District School Health and Nutrition Coordinator in each district.

Some schools are changing incredibly fast – others are moving more slowly, but the marjority are right on track.

A few of the challenges

The successes in the pilot are well outweighing the challenges. Each of the challenges are being addressed by the schools themselves and with Unity, they are proving that anything is possible!

Although I no longer work directly with schools, I stay in touch with two key networks that support SHN, who both have Facebook Pages:

In addition there are two organisations who work full time supporting Permaculture in Schools:

I’ve put a number of files related to food, nutrition, environment, etc. on a public drop box for free downloading at  https://www.dropbox.com/sh/4hddldsir1if63u/9gwZLD6tfk

Feel free to contact us if you can’t find what you need, or have suggestions or an update to share!