By Kristof on March 2, 2015 in Uncategorized 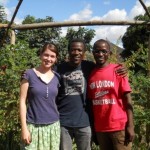 Abigail Conrad, along with her research assistants Geoffrey Mlongoti and Chisomo Kamchacha
(image courtesy of www.abigailconrad.com)

In one of the most extensive studies ever done–to date–on the implementation of Permaculture practices in Malawi, researcher Abigail Conrad has just released the results of her Doctoral dissertation entitled, “We Are Farmers: Agriculture, Food Security, and Adaptive Capacity Among Permaculture and Conventional Farmers in Central Malawi”.

Ms. Conrad (now Dr. Conrad) conducted her research in Malawi from September 2011 to July 2012 with the aim of evaluating “the impacts of using permaculture by comparing the agricultural practices and food security of smallholder conventional farmers to farmers who use permaculture.”  The study takes an in-depth look at Malawi’s agricultural history, exposes several drawbacks to current ‘conventional’ agriculture practices, highlights many benefits that local farmers identified through their practice of Permaculture, and gives a realistic analysis of the challenges facing the expanded uptake of Permaculture in Malawi.

This study is exciting and encouraging in many ways.  First, there has been a glaring lack of academic research surrounding the use of agroecological approaches, such as Permaculture.  One of the reasons for this disparity is highlighted in Conrad’s paper where she writes: “Anthropologists Veteto and Lockyer state that permaculture “has largely been ignored” in academia generally, and in anthropology specifically, because it was developed when discrete disciplinary approaches were well not suited to address the holistic approach of permaculture (2008:49).”  Conrad also states that: “Further, permaculture challenges how governments and NGOs usually teach people to farm. Scientists, governments, and agribusinesses have devalued and eroded indigenous farming knowledge, like that used in permaculture, with the imposition of monocropping and Green Revolution technologies.”

Secondly, Conrad’s findings help to highlight some of the benefits that Permaculture farmers are already experiencing through the implementation of sustainable design systems.  Interestingly, the majority of Conrad’s research took place during a highly economically unstable period in Malawi, and yet Permaculture farmers continued to express gains and benefits.  She writes:  “Further, the permaculture farmers experienced the benefits discussed during an abnormal time of political, economic, and environmental stress and shocks. In 2011-2012, the economy was unstable because of limited foreign currency due to donors withholding aid funds and low global tobacco prices, which led to higher food prices, inflation, imported fuel shortages, decreased fertilizer imports, and sugar shortages (Dionne, Kramon, and Roberts 2013:14; Wroe 2012:139)…These broader factors negatively affected household livelihoods; however, these problems did not prevent permaculture farmers from experiencing benefits.” Again, from the paper: “My primary findings suggest that permaculture farmers experienced multifaceted benefits from implementing permaculture because the farmers used permaculture practices that addressed specific household constraints and expanded their adaptive capacity.”

More information regarding Conrad’s research, methodologies, findings, and recommendations can be found by visiting her website at AbigailConrad.com

To highlight some of the most interesting and promising aspects of Permaculture implementation in Malawi, we will let the study speak for itself.  Here are a few quotes from the paper:

The full dissertation in pdf format may be downloaded here:
Conrad – FINAL Dissertation We are farmers

Potential of Permaculture, by Abigail Conrad

The Over-Consumption of Maize, by Abigail Conrad