In November of 2009, Malawi was host to the International Permaculture Convergence (IPC9).  This event took place at Kumbali Estate located just outside of Malawi’s capital city, Lilongwe.  Kumbali Estate is a large 650 hectare agricultural/dairy estate as well as the home of Kumbali Country Lodge, a beautifully luxurious lodge and conference center.  Within walking distance of the lodge is the Malawi Cultural Village, a restaurant, bar, and activity center for cultural, sports, and various other social activities.  This Cultural Village also maintains 12 huts for traditional-style accommodation.

From horse barn to Permaculture Center in just a few short years!

When the owners of Kumbali Estate (Guy and Maureen Pickering) were approached about the possibility of using the area as the venue for IPC9, they became interested in the potential that Permaculture held for the benefit of Malawi.  They believed so strongly in this, in fact, that they designated 30 hectares of the estate as the future site of the Nature’s Gift Permaculture Center.  It was decided that this center, which had formerly been used as a horse stable, could be used to help accommodate the more than 100 people who would be putting up at the estate for IPC9.  This, however, meant that a great deal of work needed to be done, for there was no roof on any of the buildings.  The owners of Kumbali Estate made an enormous initial investment in terms of money, time, resources, and labor to make this transition a reality.  By the time that the convergence rolled around, the Nature’s Gift Permaculture Center had become a reality! 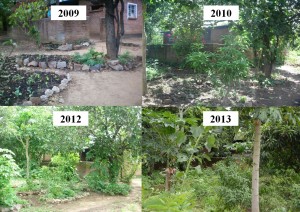 The success of IPC9, as well as the initial establishment of the Nature’s Gift Permaculture Center, was a tribute to the enormous amount of time, energy, and resources that were volunteered by a few dedicated people.   Mada Siebert (one of the main volunteers who worked to make IPC9 a reality), Hope Thornton (one of Never Ending Food’s former interns) and Eston Mgala (a staff member from Kumbali Estate) were just a few of these first people who helped to get everything up and running.  They were also responsible for putting together a small team of grounds and kitchen staff.  Eston Mgala and his wife, Carol, were two of the first staff to take up full-time residence at the center.  Together they began to implement Permaculture Designs around their house–designs which have been carried on and maintained over the years.

In 2010, several Permaculture Design Courses (PDCs) and various other trainings were beginning to be held at the center.  Again, the Pickerings raised the professional standards of these trainings with the creation of an incredibly beautiful and functional thatched classroom.

In 2011, a decision was made to create an ‘umbrella organization’ which would allow for the growth and development of future fundraising and project activities.  This new entity came to be known as the Kusamala Institute of Agriculture and Ecology.  In the local language of Chichewa, the word ‘kusamala‘ means to ‘take care of’ or ‘protect’ something.  It was also felt that by including the terminology of ‘agriculture’ and ‘ecology’ that it might open up a few funding avenues with organizations and donors who may be less familiar with the term ‘Permaculture’.  The Permaculture demonstration center has retained the name ‘Nature’s Gift’.

After the departure of Hope Thornton, the Institute took on a new director named Oliver Wootton, and a Deputy Director, Alexandra Dryer (another former intern from Never Ending Food).  These two, along with the growing number of staff, volunteers, and interns that the Institute was now attracting, were instrumental in securing funding for several long-term and larger-scale projects.  Kusamala is now under the Direction of Molly Cheatum, who is credited on their website with being “responsible for the overall design and implementation of the organization’s strategic plan; project and financial management of grants, reports and outreach; and communication with the board of directors, donors and policymakers. She has worked in various capacities in the conservation field from researching and writing about innovative financial mechanisms to inform climate change and agriculture policy, to participatory development in Costa Rica, and as a biologist for environmental consulting companies.”

The evolution of a ‘Food Forest’!

The implementation of Permaculture Designs around the Center continue to flourish and grow under the tireless efforts of staff, apprentices, and volunteers from all over the world.  There is now year-round food forest, a commercial organic garden, a solar-powered water pump, free-range chicken & egg production, large scale staple field production combined with agroforestry techniques and swale systems, tree nurseries, and so much more.

It has been fun to watch the growth and changes which have occurred over the years.  Everybody who has been involved in these continuing efforts should be extremely proud of the immense progress that has been achieved in such a short period of time.  We hope that Kusamala and Permaculture continue to have many years of helping to contribute to Malawi’s healthy, sustainable, and renewable future.  Keep up the incredible work everyone!