By Kristof on January 14, 2019 in Uncategorized

In Permaculture, ‘Zone 3‘ is generally the area in which seasonal, rain-fed production is implemented.  These Zone 3 areas often tend to be the areas in which more staple food production might take place (e.g. maize, cassava, millet, sorghum, sweet potatoes, etc.)  In Malawi, however, many people have been practicing the monocropping of maize for many years.  Maize is now often seen as the ‘only’ food, and even in years of good harvests, many farmers are only getting one food, from one food-group, giving us one set of nutrients.

When most farmers in Malawi plant maize, they have been taught to make ridges in their fields.  A typical maize field will consist of a repeating pattern of ridge-pathway-ridge.  The ridges are planted with maize, and the rest of the land is left for pathways.  Diversification is one of the greatest keys to successful Permaculture implementation.  One of the ways that people can immediately start to get more food, is to eliminate ridges and move to a ‘bed‘ system. 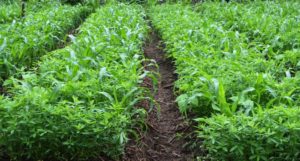 In Permaculture, many practitioners in Malawi are taking what used to be a ridge-pathway-ridge, and turning it into permanent one-meter beds.  There are many advantages to do this.  First of all, the current ridge-pathway-ridge system is only putting about 50% of land under cultivation for food, while the remaining 50% is being walked on.  The ‘bed’ system puts 70% of land under cultivation, while only 30% is used for pathways.  Maize can still be planted in beds, often down the edges, and then something else can be planted down the middle of the bed.  The middle of the beds can be reached from either side of the bed and can be planted with nitrogen fixers to help the maize to grow better, or with foods like cassava and sweet potatoes which will mature later than maize (giving more access to food security throughout the year), or with groundcovers (such as pumpkins, gourds, or cucumbers) to help suppress weeds and hold moisture in the ground.  Diversity not only helps to increase nutrition security, but also helps to feed the soil, absorb and hold water, provides habitat for beneficial predators, and helps us to mimic the patterns of nature.

In the current ridge-pathway-ridge system, the ground underneath the ridges is continually being compacted.  Each consecutive planting season, the ridges are turned over.  Meaning that this year’s pathway will be next year’s ridge.  By doing this, farmers end up walking on their entire field.  Over time, this causes the soil to become ‘hard-panned’.  When heavy rains come, the water quickly runs off of these compacted pathways, causing flooding.  And then, when there’s a gap in the rains for a week or two, the water has not been absorbed and held in the soil, so farmers quickly move into drought-like conditions.

The permanent bed system helps to eliminate this compaction.  Farmers no longer need to be walking on the areas being planted, which allows the natural processes of decomposition, ants, and worms to begin restoring the natural resilience to the soil.  When heavy rains fall on these beds, every drop is absorbed and held for much longer.  Diversifying crops also allows farmers to access more crops throughout the year from a wider range of Malawi’s 6-food groups.  Solutions exist, be the change that you want to see in the world!

The picture below shows the incredible difference that using the diversified permanent ‘bed’ system can make in years with erratic rainfall.  Both of these pictures were taken on the same day during Malawi’s 2016 ‘drought’ which left an estimated 4 million people facing food insecurity.  The picture on the left was a typical monocropped and ridged maize field, planted with hybrid seeds and chemical fertilizers.  The field on the right was less than 100 meters away and received the exact same amount of rainfall.  This field was planted using the ‘bed’ system with free open-pollinated seeds, diversified with nitrogen-fixers, groundcovers, and fed with organic manure. The results speak for themselves and show the incredible potential that every Malawian farmer has to increase food and nutrition security in the face of climate change.  This is true ‘climate-smart’ agriculture!

There is no such thing as a Permaculture ‘garden’
Agroecology for the 21st Century Conference!