By Kristof on January 1, 2012 in Uncategorized 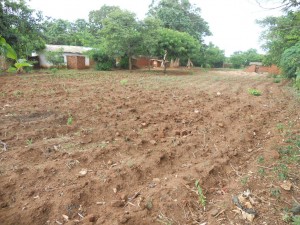 The rains have really gotten off to a slow start this year in Malawi. In fact, this is the worst start to a rainy season that Never Ending Food has experienced in the last 15 years. With that said, these drought-like conditions have afforded us a great opportunity to compare the drought-resistant advantages of Permaculture to the drought-vulnerable methods of maize planting that the majority of Malawians still opt to use.

In a normal rainy season, the rains often come by the beginning of December and by the New Year’s Eve the maize is up almost a foot high. This year, however, we got some very early rains in October and then not much of anything since then. The maize in many fields in our area is only about 3-4 inches high and curling due to lack of moisture. A couple fields have not even bothered to plant yet due to the lack of rains. Our field, by contrast, is doing very well and the majority of our maize has reached 10-12 inches in height, despite being planted later than many in our area.

Our secret? Healthy soil, mulch, and mixed cropping in permanent beds. At the end of last year’s harvest we heavily mulched all of our permanent beds so that the soil was protected from the elements, gaining organic matter and ‘structure’, and not being stepped on or compacted. This year, that organic matter and soft soil helped to serve as a sponge that absorbed and held the smaller early rains that we did get. Our mixed-crop system also helps to ensure that even if our maize fails there will still be food in our fields. We have intercropped drought-resistant root crops such as cassava and sweet potatoes, added nitrogen-fixing crops such as soy beans and pigeon peas, and then added groundcovers such as pumpkins and peanuts to help shade the soil and maintain its moisture levels. The pictures speak for themselves.

The picture at the top of this post is of a nearby field that was planted before ours was by a family who has just moved into the area and has not yet had time to ‘absorb’ the lessons and benefits of Permaculture principles. The picture at the bottom is our ‘Zone Three’ field, comprised mostly of rain-fed annual and perennial food crops.

The truly remarkable thing about our Permaculture system is that before many people have even begun to plant anything, we are already harvesting, eating, and solar-drying surplus. Just in the past few weeks we have had harvests of mulberries, avocadoes, peppers, peaches, vegetable leaves (amaranth, sweet potato, chayote, baobab, water spinach, etc), different types of yams, and

several other foods that are more specific to Malawi. Perhaps 2012 will be the year that people will really take notice of the fact that with a bit of thoughtful planning Malawi truly could have ‘Never Ending Food’!

Primary School Visit
What a difference some rain makes!