By Kristof on January 19, 2015 in Uncategorized

A Permaculture Look at Flooding

In Malawi in 2002, we heard about massive destruction, displacement, and hardship that was caused by the floods in the Nsanje district in the south of the country.  This was indeed a tragedy not only in terms of the suffering that it caused the people there, but also in terms of the damage that was done: the destruction of property, the loss of crops, environmental devastation, the damage to infrastructure, and the costs that were needed for rescue operations, relocation, food aid, and sanitation concerns.

This year, 2015, we are again witnessing a recurrence of terrible flooding and devastation in the south of the country.  These situations, as bad as they are, provide us with a very important opportunity to think about whether these are just “acts of nature” or rather something that can be prevented in the future.  We need to begin to look at the causes, not just the effects.  Water management is a very important concept in Permaculture.  Without water our crops won’t grow, we can’t bathe, wash clothes or dishes, and without clean water to drink we would die very quickly.  During the dry season, we are often in need of water as many of our rivers and boreholes run dry.

Every drop of water that falls on our land should remain on our land.  Therefore, the four S’s can be easily accomplished with the help of trees, plants, groundcover, root systems, contour ridging, and swales.  All of these things help to STOP the flow of runoff, SPREAD it out, allow it to SINK into the soil, and then SHADE it so that it remains there for a long time into the dry season helping to keep our rivers running and our boreholes full. 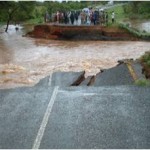 When we eliminate many of these things through poor land management practices, we begin to see that the water from our land flows away very quickly causing soil erosion and gullies.  As the water from our land meets the water flowing off of other people’s land, it will eventually form small streams that flow into larger streams, and then into rivers that flow towards the lakes and oceans.  When these rivers fill up so quickly, the increasing amount of flooding that we are seeing along the lakeshore, and in low-lying areas like Nsanje, becomes inevitable.  This runoff water also carries with it much of the valuable and nutritious topsoil that we need to grow healthy crops.

Are we practicing the four S’s in Malawi or not?  Widespread deforestation has become a very common sight, massive burning during the dry season destroys the organic matter that can help to hold back the rains, and even the plants from each year’s harvest are gathered up and burned rather than being left to return to the soil that they came from.  Monocropped ‘agricultural systems also contribute to ‘hard-pan’ conditions in which the soil becomes hard like cement.  This leads to immediate flooding during times of heavy rains and quickly turn to drought-like conditions as soon as the rains stop.  The flooding that we are seeing again this year can be blamed–in part–on all of us, for there is a saying in Permaculture that says, “We all live downstream.”  This means that no matter what we do, it will eventually come around to effect us all. 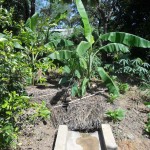 Water can be channeled into pits where bananas and other water-loving species can thrive; water can be harvested off of roofs and other structures into tanks, barrels, and other containers; water can be spread along the contour of the land using permanent ‘swale’ systems which can be used to increase food security as well as to replenish the water table; and water can be absorbed in our agricultural systems through the use of perennial grouncovers, mulching, and diversified food forests.  The solutions are endless!

We all have a role to play in teaching people about the importance of the four S’s of Permaculture—STOP, SPREAD, SINK, and SHADE.  Even more importantly, we need to begin to apply it ourselves no matter where we live.  If everybody in Malawi were working towards the design of sustainable systems of water management which harvest every drop of water into the soil, rather than creating conditions of runoff and erosion, we would quickly see an end to the annual floods that continue to plague Malawi.