Malawi schools recently played host to an ‘Open Day’ event to help sensitize the general public about the need for naturally productive school environments.  This event was a combined effort of schools in Malawi and Zimbabwe which are part of a program called ‘Friendship North/South‘.  This NGO, which is based in Oslo, Norway, promotes ‘mutual and reciprocal grassroots partnerships for sustainable development.  The partnerships are usually between communities and institutions (eg schools) in Norway and those from countries in Africa, Asia, Middle East and Latin America’.   The day’s activities also gained media coverage through ‘All Africa’ news agency first through a pre-event article, and later as a post-event write up. 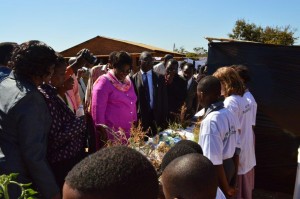 Bambino school students explaining their Permaculture activities to the Director of Malawi’s Department of Basic Education.

The theme of this year’s event was, “Practicing Permaculture and Conserving Water, a solution to Climate Change” and included 5 schools from Malawi and 5 schools from Zimbabwe who have all been using Permaculture principles to improve their surroundings.   The event was attended by many high-level delegates including the Norwegian Ambassador to Malawi and the Director of Malawi’s Department of Basic Education.   Those in attendance were treated to a tour of displays that each of the schools had set up to highlight some their various activities.

Participants getting a tour of Permaculture in practice at Chituwa school!

Along with the displays there was a walking tour of Chituwa school, where the event was being held, to show some of the Permaculture designs that have been implemented around the school’s grounds.   These designs included an incredible variety of fruit trees, indigenous trees, agro-forestry species, many different varieties of food plants, natural medicines,  as well as ornamentals.   The beds were also mulched to protect from erosion and to help feed the soil.  At Chituwa school, the surplus food that was harvested from these Permaculture designs this year was sold and generated money to buy school uniforms, which were presented to several of the students who were in attendance at the event.

Traditional dancers from one of the schools.

Our daughter, Khalidwe, playing in her school’s marimba band!

Throughout the day the participants were also treated to entertainment from each of the schools which included traditional dancing, singing, music, dramas, poetry, and more!  It was really a wonderful day and all of the students, as well as the event’s organizers, need to be commended for all their hard work and commitment!  Thanks for helping to make the world a bit more sustainable and keep up the super work!

A World Full of Seeds…Use Them, Don’t Abuse Them!
Nutrition Security paper