The Baobab tree (Adansonia species) is native to the African continent.  These trees have the unique ability to grow outward rather than upward, creating an unusually bulbous and stout trunk.  They produce hard-shelled oblong fruits, which are said to be extremely high in vitamin C.  The powder of the fruit can be used to make juice or in baked goods such as sour dough breads.  The seeds of the fruit yield oil that is edible in small quantities, but more often used for commercial purposes such as cosmetics.  The seeds may also be roasted and ground into a coffee substitute.  The leaves are edible and are a high source of iron.  They may be used as a suitable spinach substitute.  The bark yields a fiber that may be sustainably harvested without killing the tree and woven into fabric and rope.  The multi-functional economic value of this tree has been tremendously overlooked by most ofAfrica.  According to an article in National Geographic, as of 2010 the potential value of the international market for baobab products stands at a billion US dollars per year. 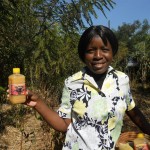 Shupe with her baobab juice

In Malawi, there are a few products that are starting to be generated at a local level   Our friend, Shupe, has been making baobab juice for several years now and using it to supply grocery stores and other local markets.  There is also a business just up the road from Never Ending Food called ‘TreeCrops’ that is marketing the powdered baobab fruit and exporting the oil, along with other products.  Unfortunately, despite the growing economic interest, we have yet to see many individuals or projects devoted to the replanting or replenishing of these trees.  One of the reasons for this may be due to the fact that the baobab tree doesn’t need to be replaced very often as it has been estimated to live for upwards of 2-4,000 years!  That’s amazing return on your energy if you can take 5 minutes to put a seed in the ground that has the potential to give food to a nation for the next several thousand years.  We have planted several of the trees at Never Ending Food and while we are waiting for the trees to give us fruit we have been eating the leaves as a vegetable crop for several years already.  The marvelous tree should be celebrated as an African ‘miracle’ for all of its uses, but instead (as with many other local resources) it is all to often viewed as a ‘bush food’ and even, at times, cut down to allow for the further planting of maize (corn) crops.