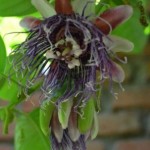 It has been said that the Passion fruit, Passiflora edulis, (also ‘Grenadilla’ or ‘Passion flower’) got its name from early Christian missionaries in the fruit’s native home of South America.  The flower was thought to have religious symbolism concerning the death of Christ.  Purple is the color used during the season of the ‘Passion’ of Christ to represent royalty, the string-like filaments surrounding the flower are reminiscent of the crown of thorns, and the three stamens in the middle (which are flattened on the end) are similar to a nail in appearance, causing the missionaries to equate them to the three nails that were reportedly used to hang Christ on the cross (as well as symbolizing the Christian trinity).  It was introduced to Africa during Colonial times, but is now becoming fairly widespread.  It propagates relatively easily from seed.

There are two common varieties of fruit, a purple and a yellow.  The tropical citrus-tasting fruits of both varieties are sources of vitamin C, vitamin A, carotenes, riboflavin, phosphorus and potassium.  The fruit pulp can be made into juices, jams, syrups, and fruit-based desserts.  The leaves are medicinal and can be made into a mildly sedative tea by boiling 3-4 leaves in water for 10-15 minutes, strained, and taken to help treat nervousness or sleeplessness.  The fresh leaves are also said to help soothe burns and skin irritations when used as a poultice. 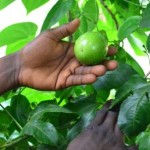 Passion fruit’s use in Permaculture design is multi-faceted.  It is a hardy climbing plant, often growing for many years, which may be trained to cover trellises, fences, walls, buildings, and other structures.  It is a wonderful cover for providing shade to outdoor areas and can help to cool the roofs of houses in tropical climates.  It can be an aggressive climber as well, so if using a tree as a supporter make sure that it is strong enough and not one that may be affected by the passion fruit’s growth.  This is also a highly ornamental and fragrant plant when blooming, making it ideal for ‘functional landscaping’.