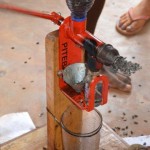 We were pressing our own oil this week, so I thought I’d take the opportunity to share some of that process with you.   Several years ago we got a hand oil-press that is made by a Dutch company named PITEBA.  This simple device works by hand-cranking oil seeds through an expeller-screw (which looks a bit like a small meat-grinder).  Underneath the expeller-screw shaft there is a slit in the metal for the oil to drain out, as well as a lamp-oil bottle which mounts to the unit to heat up the oil and increase its viscosity as it drains out.  At the end of the shaft is a screw-on cap, which can be regulated for different sized seeds and is where the seed ‘cake’ exits after the oil has been extracted.  According to PITEBA, many of the oil seed ‘cakes’ can serve as a protein concentrate in the feed for chickens, pigs, goats, ducks and cattle; it is also rich in nitrogen, phosphorus, potash and magnesium which makes it good for organic fertilizer; and, it can be burned as a fuel source. 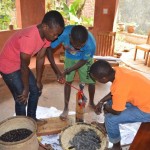 The PITEBA website states that the unit costs under $150 dollars with shipping to non-European Union countries.  We got ours at a discounted rate from the US Peace Corp/Malawi’s Environment Sector (Thanks Peace Corps!).  The unit can be mounted to a tree, but due to the oil-lamp which needs to remain burning during the processing, we’ve found it easier to mount ours to a portable wooden base which can be used in an enclosed or semi-enclosed area.  A local carpenter was able to fashion this hard-wood base for us (see picture).  The first mount that we had made ran horizontally to the length of the press and we found that as we exerted forward pressure during the cranking process the mount had a tendency to ‘wobble’ and shift.  We remedied this by changing the direction of the mount to run perpendicular to the unit, so that now when we crank the wooden mount supports the force much better. 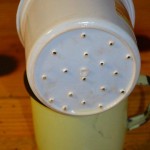 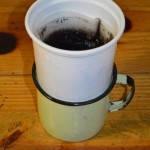 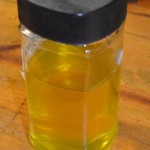 During this round of processing we were using black oil sunflower seeds.  The raw oil from these seeds comes out very black, but this is easily filtered out into beautiful yellow cooking oil.  For the filtering process we simply poked a few holes in the bottom of an old yogurt container, placed this on top of a cup that was large enough to hold it in place, and then ran the oil through a coffee filter.  According to the PITEBA website, in and hour’s worth of processing approximately 3 and a half kgs of seeds will produce about 1.3 liters of oil.  We found these calculations to be fairly accurate.  A liter of free oil for an hour of work isn’t too bad of a payoff, of course there is also the set-up and clean-up time to take into consideration, but thanks to the help of our wonderful apprentices, Howard, Hardwell, and Chiku this process was relatively fun and pain-free.  Hope that helps to explain the process a bit, I’m off to make make a batch of popcorn with some of our fresh-squeezed sunflower oil!

A Visit from the Ministry of Agriculture!
Climate Change or Real Change?