By Kristof on February 20, 2012 in Uncategorized 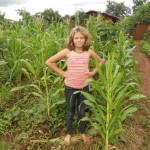 Due to the very slow start to the rainy season here in Malawi during the month of December, many farmers who planted their seeds early found that they germinated and then died due to lack of moisture.  At the end of January we read that the government was attempting to redistribute over 30 metric tons of new seed to over 100,000 farmers.  Unfortunately, by the end of January there is only a little over a month of normal rainfall remaining.  Harvest season often starts in March and continues into April.  It would be a very rare crop of maize that could be replanted and come to maturity in just over a month’s time.  If, on the other hand, seed stock (cuttings) for food crops such as cassava or sweet potatoes were distributed, there would be a much greater chance of the farmers producing a sizeable harvest.  These are crops that are often planted later into the rainy season and come to maturity throughout the dry months.  One of the problems that we continue to face in Malawi, however, is that any crop that is supplementary to maize is often not viewed as ‘food’.

The pictures above show the conditions of various maize crops around our area.  The picture on the left is of a maize crop that made it through the slow start to the rains, but has become malnourished due to a lack of soil fertility.  This field will probably not end up yielding much in terms of quantity or quality of food.  The picture on the right is of a maize crop that was planted very late into the season and has been heavily fertilized with chemical fertilizers.  One bag of fertilizer is currently being sold for around 10,000 kwacha (around $60 US) and a field this size would take about 2-3 bags to cover it properly ($120-$180 US).  There is no guarantee, however, that this crop will be able to mature in time for a substantial harvest.

This picture at the bottom is of our mixed-crop system that continues to thrive.  It was planted with the first rains and had no trouble making it through the dry spell due to the organic matter and mulch that we use.  It is developing well as can be seen from the comparison heights (with our daughter Khalidwe used to show perspective).  It is also much more nutrient-dense in the fact that we will be harvesting not only maize, but also pigeon peas, pumpkins, soy beans, amaranth, peanuts, bambara nuts, cowpeas, sunflower seeds, and more.  And, best of all…it has been FREE.  We save open-pollinated seeds that can be re-planted each year without needing to be purchased; we use a variety of naturally free methods to return nutrients to our soil (including compost, worm farming, mulching, composting toilets, liquid manure, planting of legumes, etc); and we mix our crops both in terms of diversity and in seasons.  This allows us to harvest nutritious foods throughout the year. Again, a win-win situation for the Permaculture approach!

Permaculture As A ‘Development Tool’
What a Great Use of Fence Space!