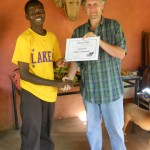 Three more young Malawians have just received their Certificates in Permaculture Design!  Howard Zamula, Hardwell Kaniye, and Junior Mwale are all secondary school students and neighbors of Never Ending Food.  For several years now they have been coming around to observe the permaculture activities at Never Ending Food.  Eventually they began to show initiative by implementing various ideas at their own homes.  This initiative was rewarded last year when Never Ending Food agreed to take these three boys on in a paid ‘apprentice’ position, with the understanding that they

would be working towards a certificate in Permaculture Design.  The boys began coming for an hour or two each day after school to help with the hands-on maintainence of the plants, animals, soil/water management, and other related actitivies.  When time allowed, Kristof would hold sessions with the boys, teaching permaculture theory, design aspects, guild systems, zoning, and more.  They were also able to watch many videos on Permaculture, organic gardening, and the effects of industrialized farming (including biotechnology and genetic engineering that is quickly sweeping into Malawi after Monsonto bought our National Seed Company about 5 years ago).   Last year Never Ending Food acquired a new plot of land (about 3/4 of an acre), the boy’s final project consisted of mapping this new plot of land and creating their own personal designs for what they would like to see happen there in the future.  We took each of these designs and combined them into a ‘master plan’ which began to be implemented this year during the rains.  We are currently harvesting the results of their hard work and have brought in several cartloads of maize and sunflowers, along with beans and Irish potatoes.  In the upcoming months we expect wonderful yields of sweet potatoes, millet, pigeon peas, cassava, peanuts, roselle

(for tea), and a wide variety of seeds for next year (amaranth, hibiscus, crotalaria, blackjack, local basil, and many more)!  The change has been phenomenal, what began as a monocropped and fertility-depleted maize garden is now transforming into a diverse multi-cropped, seasonally available, and organic year-round patch of food security.  Never Ending Food is saving some of the best seeds from the yeilds and sharing the remaining food with the six families who live in the model villages and the families of those who helped with this year’s labor.

These boys have shown a great deal of dedication and perserverence despite their friends (and sometimes their families) telling them that they were acting ‘crazy’ and should be sweeping and burning instead of planting things!  Now, however, all of their families have really come around to the ideas, and their houses have frequently become part of the Never Ending Food tour for visitors and guests.  (We often average 3-4 visits per week as the interest has been rapidly spreading!)  Howard, Hardwell, and Junior have also become excellent teachers as well as role models.  Part of the graduation

The 3 boys explaining to their parents about Permaculture principles

ceremony included a tour of the implementation of their designs and a chance to explain these things to their parents.  To Howard, Junior, and Hardwell we tip our hats, offer a HUGE congratulations, and encourage you to carry not only your certificates, but also your knowledge, with you for the rest of your lives…whatever the future may hold!